University years in Szeged – the foundations of a career in science 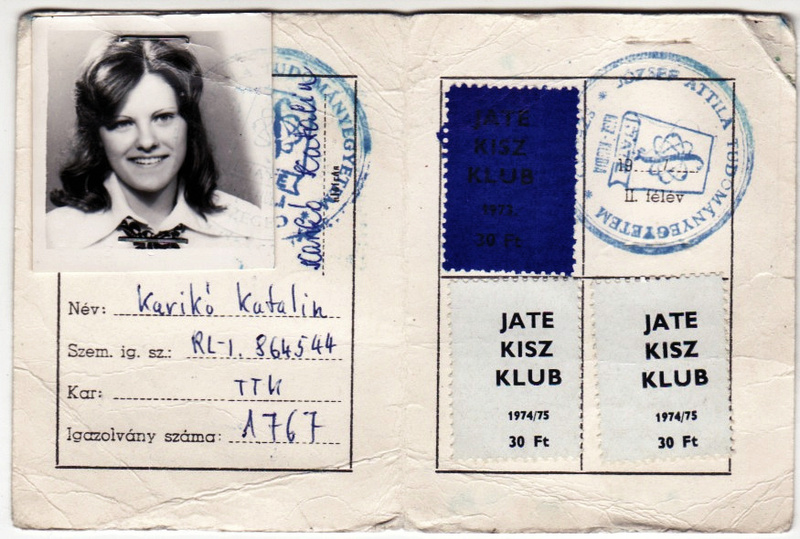 From the age of 16, Katalin Karikó spent two summers preparing for university admission in preparatory courses offered at the time for children of working-class parents, so that after graduation from high school she would be able to continue her studies in biology at the University of Szeged. Thanks to this, in the summer of 1973, she was ranked third in the 15-person admission listing on the basis of her score (receiving 19.5 points out of the possible 20.0) and was able to resume her studies there.

The University of Szeged, originally founded in 1872 in Kolozsvár/Cluj (today Cluj-Napoca Romania), has been operating in Szeged since 1921, and has had an independent Faculty of Science from its inception. The university had a special position in Hungary, as the Faculty of Science was the first of the major Hungarian universities to become independent, and this has been reflected in its academic achievements and prestige. This is why Katalin Karikó did not choose the University of Debrecen, closer to her home town, or the more central university in Budapest. 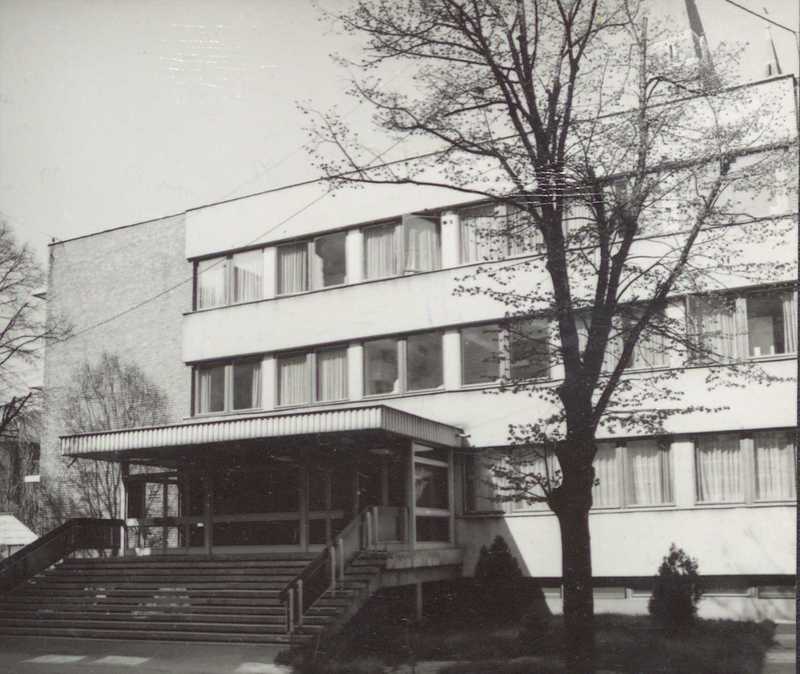 The building of the Institute of Biology in Újszeged 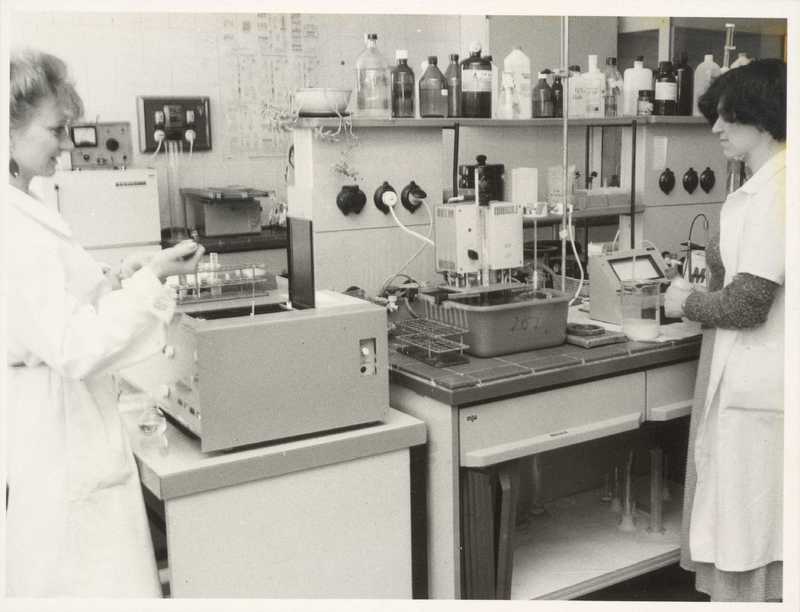 A Lab in the Institute of Biology

Although higher education in Hungary was controlled by the communist dictatorship until 1990, with obligatory ideological subjects and a corresponding worldview and political orientation expected or even obligatory, these constraints reduced noticeably after the 1956 revolution. By the 1970s, it was in science education and research that this repressive influence least noticeable, even if its external trappings (centralization, party management, and control, etc.) remained.

Indeed, the contemporary political system gave relative freedom to scientific researchers and science students. In addition, significant developments took place in Szeged at the turn of the 1970s. In order to strengthen the training of biologists, the Department of Animal Physiology was established in 1968, the Department of Microbiology in 1972, and the Department of Biochemistry, the Department of Genetics, and the Biological Isotope Laboratory in 1974. That is, while previously there were four departments for biology training and research, by the mid-1970s their number had risen to nine. This organizational, infrastructural, and personnel development provided excellent opportunity for modern biologist training. According to a 1971 prospectus, biologist training in Szeged was offered with 4 main specializations: (1) botany, with a physiological and ecological profile, (2) zoology, with a physiological and ecological profile, (3) biochemistry and biophysics, and (4) genetics and microbiology. The new departments primarily improved educational and research opportunities in the latter two specializations.

Katalin Karikó in the corridor of Herman Ottó Dormitory 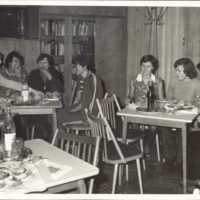 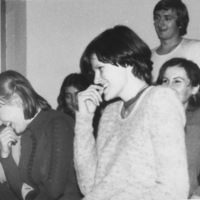 Katalin Karikó at the student event of the Herman Ottó Dormitory 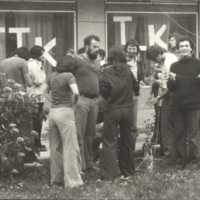 In 1972, the Herman Ottó Dormitory was opened for students of the Faculty of Science in Újszeged, in the building of a former workers' hostel, where about 300 students were accommodated. This dormitory was especially well-situated for biology students, since the Szeged Biological Research Center of the Hungarian Academy of Sciences had started operating nearby in 1971. During her university years in Szeged, Katalin Karikó lived in the dormitory, participated in its community life in addition to studying, and was a member of the student committee there. 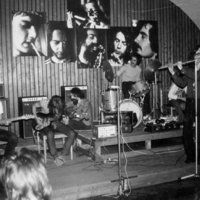 Rock concert at the JATE Club 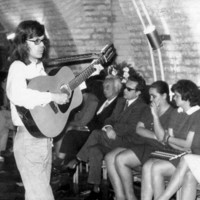 Student event at the JATE Club

At this time, the university had regular student-organized social evenings for students of specific majors, and in 1973 the JATE Club, established in the basement of the central building and soon to become nationally famous, regularly hosted playful competitions, art evenings, and popular music programs. 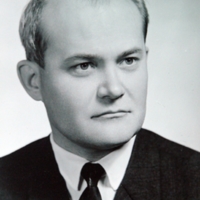 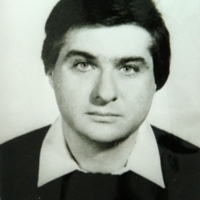 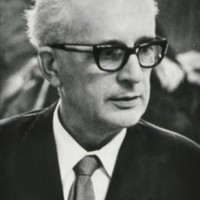 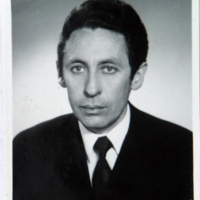 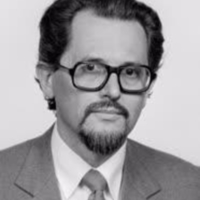 While the nation’s leading decision-makers were commonly of an older age during the Kádár regime, at the time of Katalin Karikó’s studies at the University of Szeged (1973–1978), many talented faculty members in biology were in their thirties and early forties, relatively well-traveled, and up-to-date in English-language literature and recent research procedures. Katalin Karikó was taught by the following scholars: botanist Lajos Ferenczy (1930–2004); zoologist and ecologist László Gallé (1942–), geneticist and molecular biologist László Orosz (1943–); biophysicist Zoltán Várkonyi (1938–); and biochemist László Boross (1931–2012). She completed courses in Microbiology and Advanced Microbiology taught by Lajos Ferenczy, Environmental Biology by László Gallé, Genetics I and II by László Orosz, Biophysics by Zoltán Várkonyi, Biochemistry I and II, Bioorganic Chemistry, and Enzyme Kinetics by László Boross. There were hardly any people over the age of 50 teaching specialized courses. In addition to the university faculty, the excellent researchers of the above-mentioned Biological Research Center also taught many courses, so as soon as she became a student, she met Director General Brunó Straub F., biochemist Pál Venetianer, biochemist Mária Wollemann, and plant physiologist and biochemist Gábor Farkas. Later, it proved to be fortunate that already in high school she had acquired proficiency in Russian, which was then compulsory for everyone, as she was able to exempt herself from compulsory Russian language courses at the university. Thus, she had more time and energy to learn English: She learned a lot from fellow students at the dormitory and classmates already having attained English language exam certificates, and in her third year she also took an English language course. 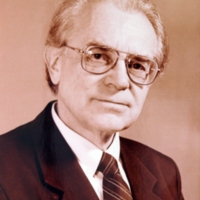 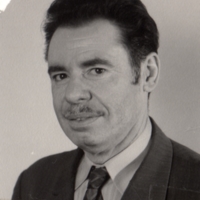 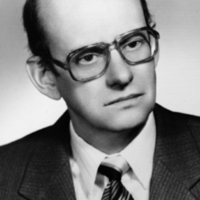 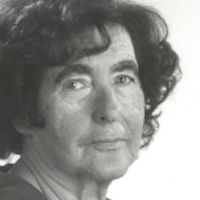 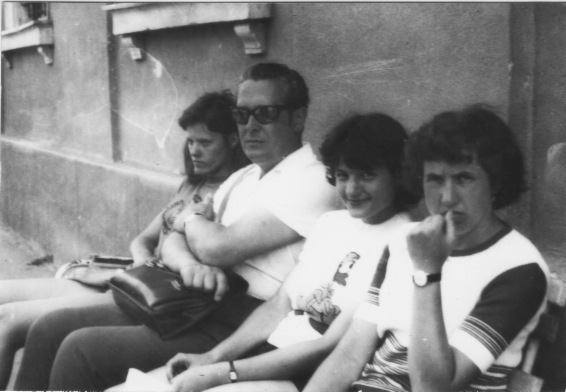 A peculiarity of the contemporary biologist training in Szeged was that the instructors tried to keep a balance between field observations in the outdoors and in-depth laboratory research. In the summer, students regularly attended one to two weeks of mandatory field research, but laboratory practicums were also an essential part of the training. Thus, students graduated with practical and real-world knowledge as well as thorough laboratory experience, while also getting to know the academic research institute and its leading researchers. 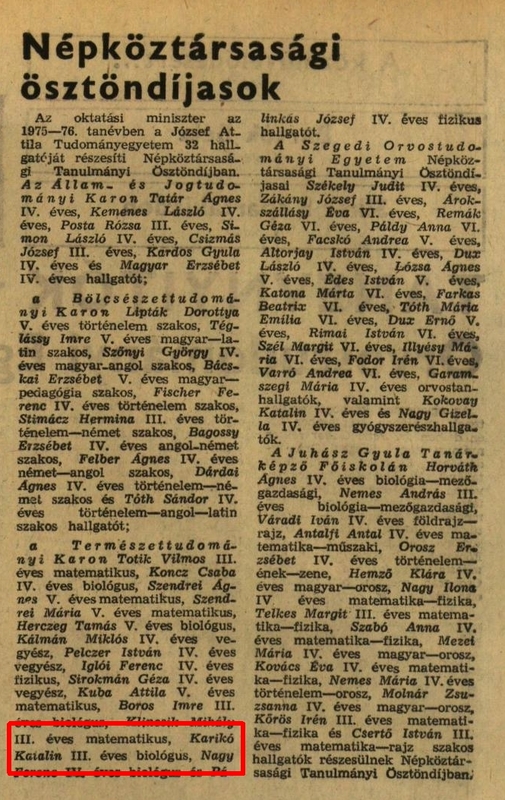 For three years (1975–1977), Katalin Karikó held a People's Republic Scholarship, available for students of universities and colleges who had achieved excellent academic results. It was rare for someone to win the highest scholarship, awarded with the approval of the ministry, for three consecutive years.

Katalin Karikó also started preparing and writing her thesis in 1976 at the Institute of Biochemistry of the BRC, in the lipid laboratory of Tibor Farkas. She also spent a summer at the Fish Breeding Research Institute (HAKI) in Szarvas as part of a summer internship, where she studied fish fats. Ernő Duda and Éva Kondorosi had asked this lipid research group to help them find phospholipids that could deliver DNA to mammalian cells. In fact, Katalin Karikó joined the group, which was far ahead of its time in the late 1970s. By the early ’80s, their efforts had borne fruit, mRNA and then protein were formed in the cells by the liposome-introduced DNA. Katalin Karikó learned here how important the issue of packaging was in delivering nucleic acids into a cell. 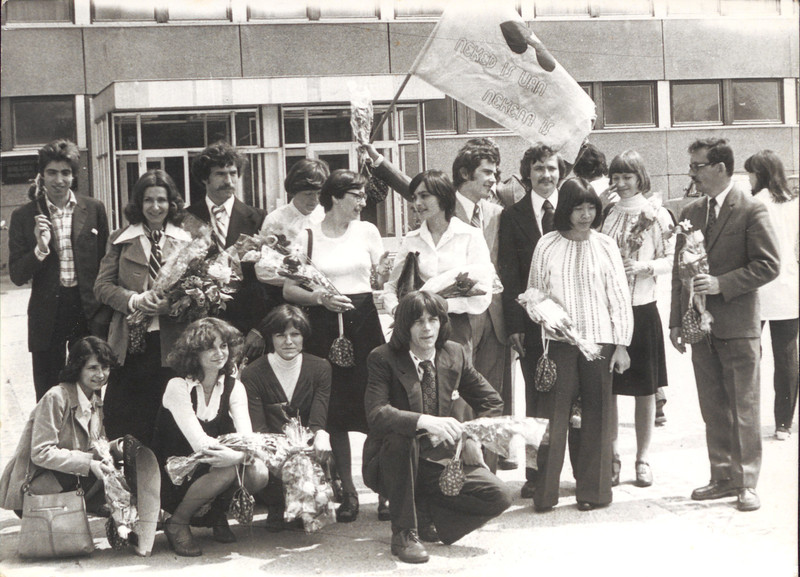